If you tend to watch or read a lot of news, you’ve undoubtedly heard about the power of social media. More likely than not, you’ve seen those crazy videos on YouTube that go viral (The Today Show seems to be turning into nothing but that kind of thing, but I digress…).

I recently got to experience a project going viral first-hand. Sure, I have been a part of projects that went viral in the past. This one was passed all around the mainstream media a few years back (before Facebook and Twitter – it was harder to spread the word back then).

But this latest project used social media and went viral on the day of its launch. It’s become quite exciting to watch. 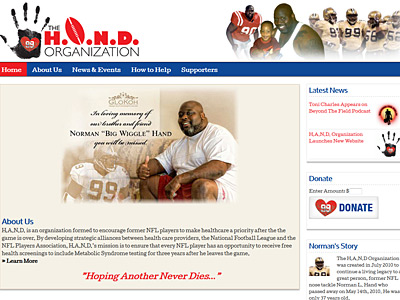 The H.A.N.D. Organization is something near and dear to my heart. It’s dedicated to educating former NFL players on the importance of maintaining a healthy lifestyle after their playing days are over.

It’s in memory of Norman Hand, a former defensive tackle for, among others, my beloved New Orleans Saints. Norman was an outstanding player and one of the most popular members of the Saints when he played. A big, burly and likeable character who specialized in stopping the opponents’ running game.

Unfortunately, after his playing days ended, Norman fell on hard times. His health deteriorated and his financial situation was dire. He passed away at the much too young age of 37, back in 2010.

Through Facebook, I met Toni Charles, founder of The H.A.N.D. Organization and the mother of Norman’s son. Hearing her story, I wanted to help in the best way I could. I donated my time to create the organization’s website.

The health of retired NFL players has become a huge issue lately. Many have died prematurely and it’s grabbing headlines. The recent death of former linebacker Junior Seau is just the latest in a long line of sad stories.

So, as The H.A.N.D. Organization’s website was launched on May 14, 2012, I thought it might be beneficial to reach out to some current and former NFL players to help publicize the site and the cause.

My method was simple. I follow a lot of current and former players (mostly with ties to the Saints) on Twitter. I simply tweeted them a link to the website, told them what it was about and asked them to share it with their followers.

While not every player has spread the word, there were several players (and subsequently their followers), who retweeted my link to the site. A few of the players even retweeted the link from other players they follow.

As they say in football, look inside the numbers:

Add up the total number of followers for just these five athletes, and word of The H.A.N.D. Organization’s new website reached 63,603 people. In one day. Really, in a small portion of one day.

Now, not every one of those followers will see the tweet (they can go by pretty quickly if you follow a lot of people) and not every one who has seen the link will click on it. But having the ability to reach that many people within a few hours at NO COST shows just how powerful social media can be.

Obviously, this isn’t necessarily going to happen for every business. This particular case is an example of a good cause kindly being promoted by people to whom this subject is very important.

But it does demonstrate that going viral is easier now than perhaps ever before. Hopefully it means good things to come for The H.A.N.D. Organization.