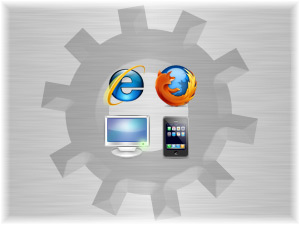 One of the most important aspects in developing your business website is ensuring compatibility with various web browsers, devices and screen resolutions.  Yet, it’s a topic that most consumers aren’t very aware of.

True, it’s the job of a good web designer to worry about compatibility issues so that you don’t have to.   But that doesn’t mean that you should assume your site is compatible.  Here are some tips to help educate you on the different forms of website compatibility, and to help you ensure that the needs of your customers are met:

Web Browser CompatibilityWhen I started my career as a designer back in 1996, there were really only a couple of widely available web browsers.  Today, there are dozens of different browsers.  And the differences don’t end there.  Consider that different versions of the same web browser can look at and display the same website in very different ways.

For example, Microsoft’s venerable Internet Explorer often drives designers to the brink of insanity with the dramatic differences between versions of the software.  Internet Explorer 6, which was released in 2001, often times cannot properly display modern websites.  But, those same websites may look and function just perfectly in Internet Explorer 7 (2006) and Internet Explorer 8 (2009).  Thankfully, the use of IE 6 is fading dramatically, and Microsoft is strongly encouraging users to upgrade to the latest version.

The Bottom Line:
The bottom line for web browsers is that your site will probably never be 100% compatible with all of them.  As fast as technology moves forward, users who stick with very old browsers are eventually going to be left behind.

Still, that doesn’t mean that you should just ignore compatibility issues.  Personally, I always aim to ensure compatibility with as many browsers as possible.  I make a good faith effort to test and ensure that my websites work in Internet Explorer (even IE6), Firefox, Safari, Chrome and Opera.  While there are many other browsers out there, the number of people actually using them is quite miniscule.  And just because they haven’t been tested doesn’t mean that they aren’t compatible.

The trick is to make sure your website works properly in the last 2-3 versions of the popular browsers mentioned above.  Also, make sure your web designer doesn’t add any major functionality to your site that only works in one brand of web browser (this is a famous problem in IE).  At the same time, don’t worry yourself silly with folks who are still using software that is 10 years old.  Yours is certainly not the only website they aren’t seeing with pixel-perfect accuracy.

Screen Resolution In my experience, this is the one issue that consumers know the least about when it comes to the compatibility of their website.

Once in awhile, when working on a new design, a client mentions that their new website “doesn’t fit their entire screen” or that they would like to “eliminate scrolling”.  This is due to the differences in screen resolution.

Screen resolution is essentially the number of pixels (tiny dots) that your screen displays.  The higher the resolution, the more viewing area that is available on your screen.  Note that monitor size is not the only factor in deciding what resolution your system uses.  Your computer’s video card also plays a vital role in that determination.

One of the biggest challenges of website compatibility stems from the fact that there are such a wide variety of screen resolutions in use.  Seriously, you could have 10 web surfers on your block and they could all be using a different screen resolution.  So, just because a website looks a certain way on your screen, that doesn’t mean that others will see it the same way.

The Bottom Line:
As I mentioned above with regards to web browsers, you probably aren’t going to optimize your site for every screen resolution.  I recommend designing for a minimum resolution, usually 1024×768.  Most systems built within the last 10 years can display that resolution and it’s a safe bet that your site will be compatible.

Websites can be setup as “fixed width”, meaning that the site will be the same width no matter the size of the user’s screen resolution.  Or, it can be an “elastic” layout, meaning that the site will take up the full browser window at all times (as long as the user has the minimum screen resolution that the site was designed for).  Clients often like to choose which method to use based on their own personal preference, but I recommend thinking about what is most convenient to the site’s visitors.  It really depends on what kind of content you have and the overall look you’re trying to achieve.
If you’re not sure which is right for you, don’t be afraid to ask questions!

Mobile Devices If you think there are a wide variety of web browsers and screen resolutions, just think about the number of mobile devices there are in the world!  From your grandfather’s old internet enabled Palm Pilot to your best friend’s sleek new iPhone, the list of products and capabilities are endless.

Personally, as a web designer I concern myself more with iPhones and Blackberries than any other devices.  They are the most advanced and have the best web experience.  And, while I haven’t played around with the Android phones, I’ve heard great things about their web capabilities as well.

While those high-end devices are thankfully pushing things in the right direction, they still have limitations.  The biggest one from a website owner’s standpoint is that they do not currently run Flash animations.  So, if your site uses Flash, users will not be able to see that content.  Providing equivalent content to devices that aren’t compatible with Flash is generally a pretty simple process.

Screen size is also a concern, but this new breed of smartphones often let you “zoom in” to get a closer view of your site’s content.

The Bottom Line:
It used to be that it was recommended for everyone to have a separate version of their website just for mobile devices.  But not everyone has this need.

If you’re a news-oriented, content rich site like a newspaper, then having a mobile version of your site is a necessity.  If you have a small, 5-10 page site, it’s probably not worth the investment unless you have some sort of content that absolutely is geared for smartphone users.  Otherwise, as long as your site works relatively well on these devices, you’re probably just fine with what you have.

Do I need an App for that?
If you have ever used an iPhone, you know how cool the App Store is and how many great things that are available.  I’ve been asked by clients whether I’d recommend getting an app developed for their business and, frankly, most businesses will probably never need one.

Certain e-commerce sites could greatly benefit from having an app.  If you sell a wide array of products online, an app can make the buying process much easier for consumers and that can lead to a lot of sales.  But again, for most small businesses, it really isn’t a necessity.

And, on a final note, I wouldn’t worry about attaining compatibility with those phones with “web capability” from the early 2000’s.  The user experience on those devices were terrible.  It’s doubtful that anyone who is at all serious about browsing the web on a phone is still using one.

Have a question? Please don’t hesitate to contact me!