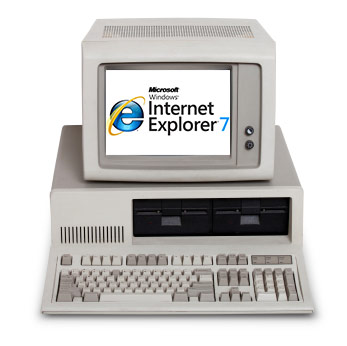 As a web designer, it almost seems like a job requirement to be annoyed with old technology. Because, as new hardware and software comes out, I want to take full advantage of the new possibilities that they present.

Yet, as great new standards like HTML5 and CSS3 are implemented into the latest web browsers, and hardware technology makes things faster, I’m still held back by the guy using Internet Explorer 7 on a dial-up connection.

Well, I’m held back to a point. It used to be that you always had to design and implement features with the lowest common denominator in mind. Meaning, you had to make sure the guy with IE7 and the snail-slow connection got 100% the same experience as the lady with the latest version of FireFox, 6 core processor, HD monitor and broadband connection.

It’s now becoming a more accepted practice to take advantage of a new feature, so long as it degrades well for folks using older hardware and software. Thankfully, most HTML5 and CSS3 features do indeed degrade well.

That means that the goal isn’t necessarily giving every single user the same exact experience on a given website. Today, it’s more about making sure that the website works using the older technology.

As a designer, I can’t (nor should I) try and make people upgrade their hardware. They shouldn’t have to spend hundreds of dollars just to see a useable version of a website. I can definitely suggest they upgrade their browser if possible (especially for security reasons).

My responsibility, and the responsibility of a website owner, is to ensure the site at least works on some older systems. Yes, some things may look a bit different in IE7 than in IE9, but as long as the user is able to access the info they need in a reasonable fashion, that’s what matters most.

There is a Limit

Some of you may be aware of the absolute hatred we designers have for IE6. There are some legitimate reasons for that. Chiefly among them is that it uses proprietary (as opposed to open) standards and was virtually incompatible with any non-Microsoft standard when it was released in 2001.

And there is also that last little tidbit – it was released in 2001! There is no reason for someone to use an insecure 11 year old piece of software that has more bugs than a landfill in July. If you do any shopping online and you still use this browser, it’s an open invitation to have your personal information stolen.

There was a time that, despite the efforts of many good people, we still had to support IE6. There were still enough people using it to justify making nice. Thankfully, those days are over and I, for one, no longer support IE6 in anything I design. These days, IE7 is as low as I’ll go.