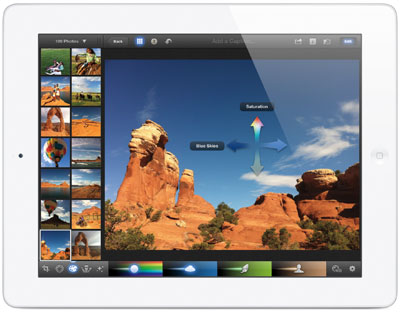 Ah, the sights and sounds of spring are finally coming.  Birds are chirping.  If you live in Arizona or Florida, you can hear the crack of a baseball bat during spring training.  And, if you’re a gadget geek, spring also means a new version of the iPad has come.

On March 7, Apple CEO Tim Cook and friends introduced the latest iteration of the top-selling tablet in the world.  To paraphrase Cook, Apple is leading the charge of the “Post-PC” world.

I, for one, love the iPad.  I have the original model, but probably won’t be upgrading anytime soon.  Not that I don’t want the new retina display or improved camera.  I just don’t see myself dropping $499 (for the base model) each year for a device that I use mostly to browse the web and play interactive storybooks with my daughter.

The iPad also has a place in the business world.  I do take it along to meetings and it’s great for taking notes and showing clients various things on the web.  I also use it to ensure the websites I’m working on are compatible.  But, despite Cook’s assertion, it’s not going to replace my PC anytime soon.

Casual home users may be able to get away with just using their iPad or similar device for their computing needs.  That’s just not going to fly at work.

As a web designer, the applications I use on a daily basis require a whole lot of computing power.  Significantly more than any tablet, and probably more than only the highest-end laptop.  Not only that, but I’ll need to run these high-powered apps all at once for efficiency.

Most business users are also going to need the screen real estate that comes with a full-fledged PC.  While that new iPad has a gorgeous display, it’s not going to compare to a 24 inch monitor.

So, I don’t think the PC is going away anytime soon.  If it were, I don’t think companies like Intel and AMD would continue spending a fortune developing faster desktop processors.

Tablets, smartphones and the like have a definite place in our lives.  They’re fun to use and their evolution is quite exciting to watch.  They are taking a certain segment of tasks away from PC’s.  But, they’re only pieces of a puzzle.  I don’t think that the demise of the PC is going to happen anytime soon.